Several years ago, I lost my mentor, Dr. Thornton, in a tragic accident. Her sudden departure rocked me to my very core – as she was a woman who inspired me to become the person I am today. My late mentor and friend was a world traveler herself, and I was always captivated by her tales of foreign places she had roamed. Before she passed, I met with her and we discussed her next getaway. She was set to depart for Vienna, Austria – which she described as one of her favorite European cities. For quite a while, I was in denial that she was gone. Instead, I preferred to believe that she just took that trip to Austria instead, and that she was forever memorialized in time, sitting happily at a cafe in Vienna.

This personal reflection may seem like an unusual way to preface a blog entry about travel – but I mention it because it places context to the high expectations I had for Vienna. I held her opinion in such high regard, so any destination that held a special place in her heart was sure to be special to me too. When I finally arrived in Vienna myself, I could immediately feel her presence, and understood exactly why she loved this magical city.

Vienna (which locals called “Wien”) was the second major stop on our journey – just a short train ride form Budapest. We got off an early morning train and checked into our hotel, which was a chic boutique hotel in the Museum District. Once again, our little suite exceeded every expectation, and I was beginning to realize that having a boyfriend who reads hundreds (maybe thousands) of reviews before booking was a valuable travel asset. We wasted no time. By noon, we were sitting in an adorable beer garden eating wiener schnitzel and drinking porters.

I immediately knew the food in Vienna was going to be spectacular – which traditional dishes that all included fries, hearty potato dumplings, and golden fried chicken/pork filets. (Any culinary philosophy that is based heavily around deep-frying and an excess of potatoes strikes a chord with me.)  I am also a fan of any culinary scene that makes a beer or cocktail a socially accepted norm at breakfast. While I am not usually a fan on beer, the dark, sumptuous microbrews in Vienna were an experience that was totally new to me – and I LOVED it. A tall beer emanated a nice little warmth and relaxation throughout my body, which was a nice way to begin each day. (I promise I will not continue the habit of “breakfast beers” back home!)

We made sure to savor the culinary offerings of Vienna by carefully selecting authentic family-style restaurants, chic cafes, and gastropubs – each better than the last. My taste buds certainly enjoyed Vienna, and my takeaways were the following: I will probably never enjoy an American beer or Apple Strudel after relishing in the Austrian variation; and I will probably be stealing the practice of sprinkling fried chicken with fresh lemon and sea salt.

When we weren’t eating our way through Vienna (which I promise, was some of the time), we meandered through the most immaculate metropolis I have ever seen. Aesthetics are obviously important in Vienna. Not only are the people beautiful, but every street is perfectly manicured, every building pristine, and every storefront was its own work of art. There was no denying that this was a distinctly “high-end” city (which was reflective in the prices, which were a steep hike from what we had paid in Hungary.) The streets were lined with Louis Vuitton, Rolex and pastries shops, giving the eye something appealing to digest when outside the museum or church districts.

The museum quarter, located in the heart of the city, is currently comprised of massive museums dedicated to every niche of art and science. The buildings were formally parliament or government buildings, or beautiful baroque imperial palaces inhabited by the likes of Franz Joseph. The opera is also a stunning building, and holds profound historical importance (as the home theater of composers like Mozart and Beethoven.) The architecture in Vienna was particularly appealing to me. It was very regal and Romanesque. As many of you may know, I lived in Rome, and adore anything that reminds me of it. This city, embellished in gold, marble and fountains, was very reminiscent of Rome (but far cleaner, and less crowded – which was so pleasant!)

Being a primarily Catholic and very affluent region, the churches in Vienna were particularly breathtaking. Since it was quiet and not littered with tourists when we were there, the churches were very accepting to allowing visitors to enter and photograph their impressive offerings for no fee. St. Stephens, at the center of the city, was another neo-gothic style, which looked almost like a detailed sandcastle erected in the midst of a city. The inside of St. Stephens had the most colorful and intricate stained glass I have ever seen. The glass was strategically placed throughout the church to reflect bursts of rainbows onto the altar when the light shined through. I have seen many, many churches – but this unique detail made this one memorable. St. Peters church was also impressive, with every inch of the inside adorned with gold and fresco paintings.

Another unique charm of Vienna was the rooftop bars. In New York, Dani and I have a tradition of finding new rooftop bars to enjoy celebratory cocktails for special occasions. Nothing gives you a better vantage point of a city or provides such an impressive and interesting view more than being atop the tallest building in the area. We had researched beforehand, and found that Vienna had 3 very well-reviewed bars with panoramic views – all in different areas, giving a perfect diversity of views. Each location was the rooftop of a hotel, and each had prices were high enough to bring us back to earth, but the experience was unique and luxurious, so we splurged on a few glasses of champagne in each spot. The ambiance in these bars was serene, with private table nooks and a lull background of music. It was truly special to be able to sip on a drink and look out over this beautiful city together.

The marble structures of the city almost glowed as the sun reflected from them, and as sunset approached, the city gleamed a golden hue. Everything about this place, from the architecture, to the classical music, to the light breeze and the way the sun set –  was opulent and utterly romantic. It was not unusually to see public displays of affection in Vienna. We followed the customary norm, and spent much of our afternoons leisurely picnicking and napping in parks or in the gardens of the palaces.

On our last night, I was certainly sad to leave Vienna behind. But since it was a smaller city, I felt confident that we had seen a good deal of what she had to offer. Vienna was more expensive, so we spent just enough time that we were able to indulge properly without cutting into our spending for other cities. I was pleased with our time, but knew I would miss the tranquility and luxury of Austria. On our last night, we brought wine and cheese to a garden that was lit up beside a palace. Young couples were sprawled throughout the lawn, on blankets. We were tucked just beneath a large statute, with views of all the illuminated palaces spanning to the horizon. There was a fountain nearby, and a violinist who just decided to serenade the young lovers on the lawn with a beautiful classic concerto. The music, views, and crisp evening air seemed like a quintessential way to depart from such a romantic city. In that moment, I felt so lucky, so relaxed, so in love, and so absolutely confident I understood why Dr. Thornton was captivated by Vienna. 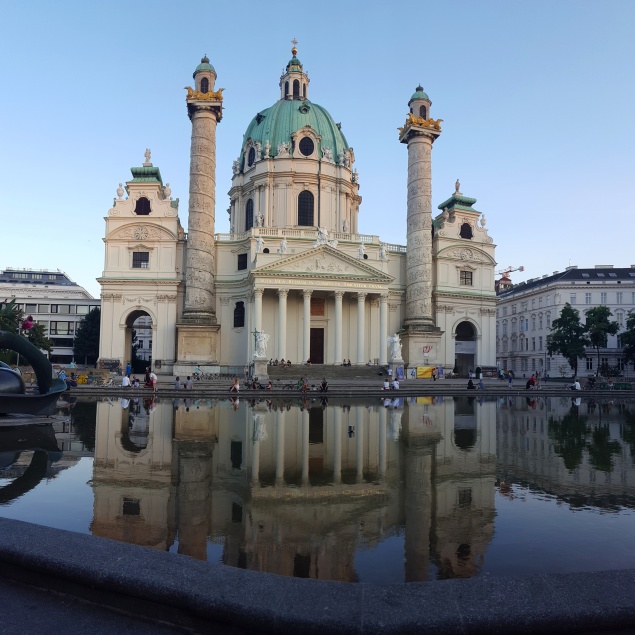 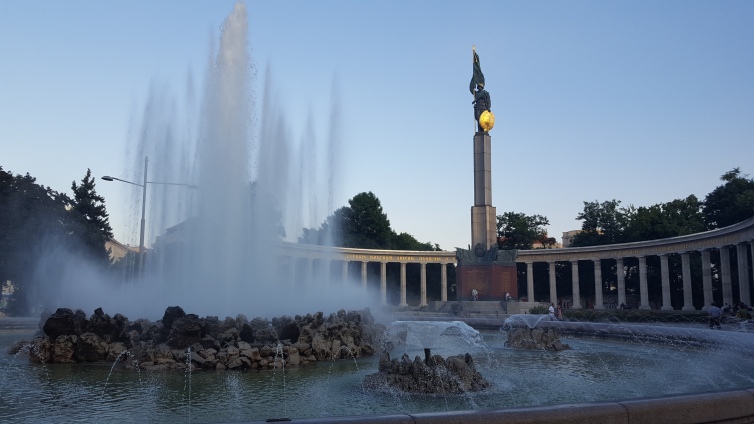 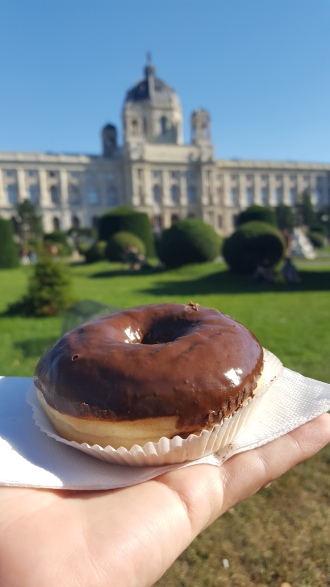 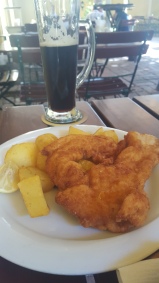